GEORGE Bazzica first went to the atomic bomb-devastated city of Hiroshima when he was only four, but he can remember it vividly, as though it was yesterday – even though it was 65 years ago.

George was part of the Busselton and Sugito Sister Cities Association (BASSCA) group that took paper cranes to the Peace Memorial Park in Hiroshima during their Sugito sister-city visit earlier this month.

Hiroshima has sprung up again, but the evidence of the first Atomic Bomb detonated in war lingers.

The most graphic reminder is the ‘Atomic Bomb Dome’ 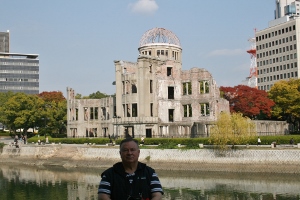 which was the Hiroshima Industry Promotion Hall. The bomb, which exploded about 600m above the structure, killed an estimated 200,000 people.

George went to Hiroshima as a child because his father Victor, who was a flight sergeant in the RAAF, 9ACS (9th Airfield Construction Squadron) went to Japan to help in the rehabilitation of Hiroshima and Iwakuni, south of Hiroshima.

In 1946 his engineering unit was one of the first to enter the city and his family, wife Anne and sons Max and George joined him in late 1947.

The dome, which looks like something on a movie set, as it is unchanged from the time the bomb was dropped, has special significance to George.

“My elder brother Max and I played hide and seek in it. There was no one there to say get out,” he said.

What he saw on this visit obviously was totally different to what he witnessed as the child who lived and went to school in the war-ravished city.

“Just the complete change from a child’s eyes,” he said. “It was unbelievable (how the city has been reborn) and it was quite emotional for me.

“So many lives snuffed out in an instant.

“The bridge on which we were standing on this trip was opposite the ‘Dome’ and was very much in need of repair (when he was there as a child).

“There were dirty smudge marks on the bridge, which we were told much later by our parents were all that remained of people who were on the bridge at the time of the blast.

“Dad was there only three weeks after the bomb and went back to help clear the harbour of ships that had been scuttled by the Japanese. They were refloated and put back into service for them.

“A big disappointment of this trip was not being allowed back on the base at Iwakuni, to show my wife where I had lived and gone to school when I was a child.

“It was run by the British and then the Australians before it was taken over by the Americans who still control it.

“Being absent so long from there and being only a kid, you doubt your memories and don’t know if they are yours or someone else’s.

“But there were (Japanese) words that were still in my mind’s eye, that I didn’t know the meaning of, such as kaki, which was a persimmon and chotto matte, which my parents always used – wait, or wait a second.

“I think that my returning to Japan after 65 years was  well overdue. I thank BASSCA for giving me and my wife Elizabeth the chance to go on the Sister City exchange.

“The return to Hiroshima and Mia Jyma was very exciting, but also tinged with a few  sad memories of my very young  childhood growing up after WW2 in a small town called Iwakuni near there.

“We hope to be able to get back there at least one more time.

“We will never forget this trip or the many Japanese friends that we made during our stay.”