The Twentieth anniversary of the relationship was a Twelve  month celebration from November 2016-2017 and began with a Mayoral delegation from Busselton travelling to Sugito for 3 days celebrations. BASSCA purchased SUGIPYON, the Sugito Town mascot, who has since become a familiar sight around the city, and  also published the Bridge of Friendship Book, a celebration of the sister city reltionship in words and pictures.

2006 was the 10th anniversary of the sister city relationship. Exchanges between Busselton Senior High School and 3 Junior High Schools in Sugito actually began in 1994, 2 years earlier than the formal relationship, when Rotary Club members from the respective towns arranged the student exchanges.

Two years later this arrangement was formalised with a sister city relationship. 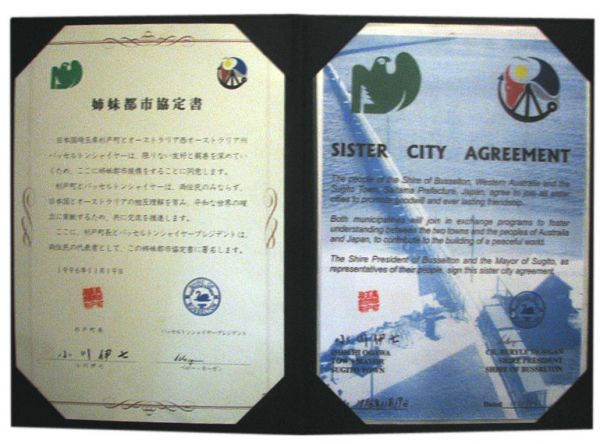 The people of the Shire of Busselton, Western Australia and the Sugito Town, Saitama Prefecture, Japan, agree to join as sister cities to promote goodwill and everlasting friendship. Both municipalities will join in exchange programs to foster understanding between the two towns and peoples of Australia and Japan, to contribute to the building of a peaceful world. The Shire president of Busselton and the Mayor of Sugito, as representatives of their people, sign this sister city agreement.

Please click on the link above to access the 'Bridge of Friendship' E Book. This book was  produced as part of the 20th Anniversary celebrations detailing the history of BASSCA - the Association and people involved.