and Stone Age implements have been discovered from about 12 000 years ago.

During the Kamakura era, Tokyo's ferry sailed the Furatone river (along Sugito's border) connecting Kamakura to the south and Ooshyuu to the north. As cedar woods were plentiful the ferry became known as the cedar ferry (Sugi no Watashi) and the towns' name is a derivative of this.

During the Edo era (1862-1912) Sugito area was a resting point (post stop) along Nikkou Higway number 5 and the town developed in its capacity as 'Sugito Inn.'

In 1889 the local villages offically merged to become Sugito Town and it became the main administrative area for eastern Saitama. Later, this regional jurisdiction was abolished and Sugito town remains.

Menuma-Sengenzuka tomb is the largest keyhole-shaped tomb mound of the Menuma tombs. It is 5 meters  high and 46 meters long. Based on its shape and burial items, it is estimated to have been built in the sixth century and has been designated a town historical relic site. 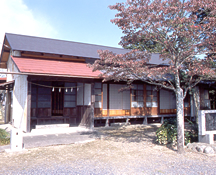 The Meiji Emperor took a break at this site in Sugito during his Imperial visit to Oshu in 1876. This monument was built to commemorate his visit in 1936.

In 1604, the Edo Shogunate set up ichirizuka (milestones) on the main roads all over the country spreading out  from Edo (Tokyo). This ichirizuka was set up on the Nikko Onari Kaido highway and is the twelfth one counting from Nihonbashi (a bridge in Tokyo that is  the point from which Japanese people measure distances.) Only Higashizuka exists now.

Suzugyoyo, or bell shape caparison - the ornamental covering worn by horses, have been unearthed from Menuma tomb No. 9.

SAIGYO Hoshi, a famous poet from the late Heian Period (794 -1185 AD) became ill and was taken care of by the Shoan (tea ceremony master) at Shimotakano (currently Todai-ji temple in Sugito) during his travel to Oshuhiraizumi from 1185 to 1190. After his recovery, he commented on the splendid shape of a pine tree and kept looking back over his shoulder as he walked away. Later, this pine tree was called "Mikaeri-no Matsu" which means "a pine tree that was looked over" and is now been protected.