Over the years many gifts have been exchanged between the two cities, and various people have donated items to BASSCA.  A collection has been created so they can be displayed and are available to community members.

The Busselton Library and Naturaliste Community Centre in Dunsborough now showcase many of the gifts received from the Town of Sugito as part of the Sister Cities relationship.

These displays which include kimonos, paintings, ornaments, scrolls, pottery and geisha dolls are updated periodically and showcase the wide variety of gifts received since the relationship commenced in 1996.

Displayed throughout the year and rotated periodically with new items these displays, in conjunction with the Friendship Garden help to commemorate our strong links with Sugito.

The largest gift Sugito gave the City of Busselton was a Fire Engine in 1998. 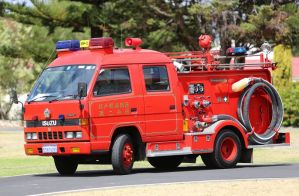 After some modifications such as additional beacons and the installation of a two way radio the vehicle has become fully operational and has been used in fires.

The vehicle has no water carrying capability, but has a 2 stage pump and is ideal for relay pumping, filling of water bombers and personnel transport.

If you hear a strange siren in Busselton, it may be the Sugito fire engine going to an incident.

For more images of the Sugito Fire truck please click the image above.

Hiroshi Tomihari, a highly regarded award-winning artist and National Treasure of Japan, visited Busselton three times between 1995 and 2001 to hold community workshops and exhibitions. He then  donated some of his valuable works to BASSCA and the City.

Tomihari is a leader in the revival of woodblock prints and specialises in modern 'mokuhanga.'Moku means wood.  Hanga means print.  This is known as the 'ukiyo-e' technique.  Tomihari combines this traditional Japanese technique with modern imagery and symbols.

Tomihari has exhibited widely in Japan, Australia, America and Europe.  His work is represented in many major collections world wide, including the National Museum of Modern Art in Tokyo, the Metropolitan Museum of Art, the British Museum and the Art Gallery of New South Wales.