The group of 15 delegates from Busselton arrived in Sugito on 28th October to a wonderfully warm reception.  There was the renewal of some old friendships, but also many introductions and new friends in the making.  The whole visit was characterised by a warmth, genuine hospitality and obvious enthusiasm for the relationship between our two communities.

The Busselton visitors were treated to wonderful hospitality including participation in Sugito’s Industrial Festival and an overnight trip to Mount Fuji.  Of particular interest to our Councillors was a tour of the garbage disposal and recycling plants.

By any measure, this was an unusual visit to our sister city.  The group of 15 delegates included several firsts and the eight days spent in Sugito were quite revealing for many of the travelers. 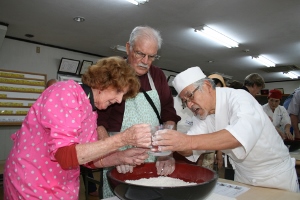 The group included, for the first time, both the Mayor Ian Stubbs and his wife Rhonda as well as the Deputy Mayor Tom Tuffin and his wife Joan.  With three other BASSCA Committee members in the group, considerable discussion ensued about the nature and quality of our sister city relationship and greatly aided communication between BASSCA and the City Council.

The first two Young Ambassadors, who received their awards during the Busselton Festival, received places on the trip as part of their prize.  For both Sarah Jane Aston and Emma Ryan, the visit served to whet their appetite for further travel to Japan.  Also joining the group was Rob Bennett who, at the time, was Editor of the local newspaper the “Busselton Dunsborough Mail”.  Rob acted as group photographer and recorded many memorable images.

In another new venture for these trips, 13 of the delegates stayed in Japan for an extra five days, visiting Kyoto, Osaka, and Hiroshima.  The group presented 1000 paper cranes to the children’s memorial at Hiroshima Peace Park, the cranes having been made by the Busselton and Sugito students and families during the student exchange activities in 2012