IN an interesting twist to the student exchange program with Sugito, this year is the second time that one local family has hosted a student, but this time as a parent. 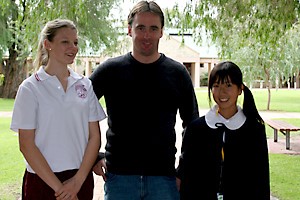 Eighteen years ago, when Glen Callegari was in high school, his family hosted a student in the very first exchange program run between the two authorities in September 1994, completing the exchange by travelling to Sugito in January 1995 with seven other students.

Now father of his own family, Glen has welcomed exchange student Ririka Yoshida into his home, and to complete the exchange will see his daughter, Maddy Anderson, off to Sugito next month for an adventure of her own.

“I didn’t fully appreciate the experience when I was younger,” Glen confessed, saying that only as an adult did he realise how much the experience changed him.

He had fun but felt he should have tried to get more out of it at the time, and has tried to step back and let Maddy form her own experiences.

“Ririka has become like a sister to our kids.”

The language barrier presented a problem, but the family have found phrasebooks and dictionaries helpful.

Ririka said that she enjoyed her time here too, saying of the Callegari family life: “It is very lively.

“I am very happy here, and I’ve made a lot of friends at school as well.”

But she wasn’t as happy with our national treasure, Vegemite.

Glen expressed that he was overwhelmed by the goodwill shown by Ririka’s family towards his own, having received many kinds words from the Yoshida family by email, despite never having met them.

“The sister relationship between the two cities is still going strong,” Glen said.

“They have had a lot of challenges as a country, so it will be very interesting to compare the two cities when Maddy gets back.”