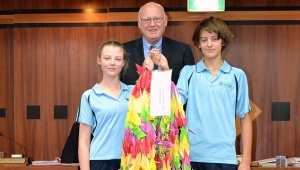 strings of peace cranes by two students who had recently been on the annual Year 9 exchange trip to Sugito in Japan.

The students even took some paper to Japan with them so their host families could fold some.

Mayor Stubbs and deputy mayor Tom Tuffin are part of a group of 15 adults who are currently participating in the biannual adult exchange to Sugito.

After experiencing eight days of being hosted in Japanese homes in Sugito, part of the group is journeying to Kyoto and Hiroshima where they will hang the strings of cranes in Hiroshima’s Peace Park.

Making cranes for peace is inspired by the story of Sadako and the 1000 paper cranes.

Sadako Sasaki lived in Hiroshima and was two years old when the atom bomb was dropped.

Eleven years later she developed leukaemia or ‘atom bomb disease’ as it was often referred to.

Sadako only managed to fold 644 cranes but her school friends finished her mission and today strings of cranes are still made and presented for good luck.

A very excited group of Year 9 students recently returned from their exchange to Sugito where they stayed with the families of Japanese students who came to Busselton in August.

While a highlight for some was their visit to Tokyo Disneyland, all of them thoroughly enjoyed going to school with their host brother or sister – an experience quite different from what they are used to in Busselton.